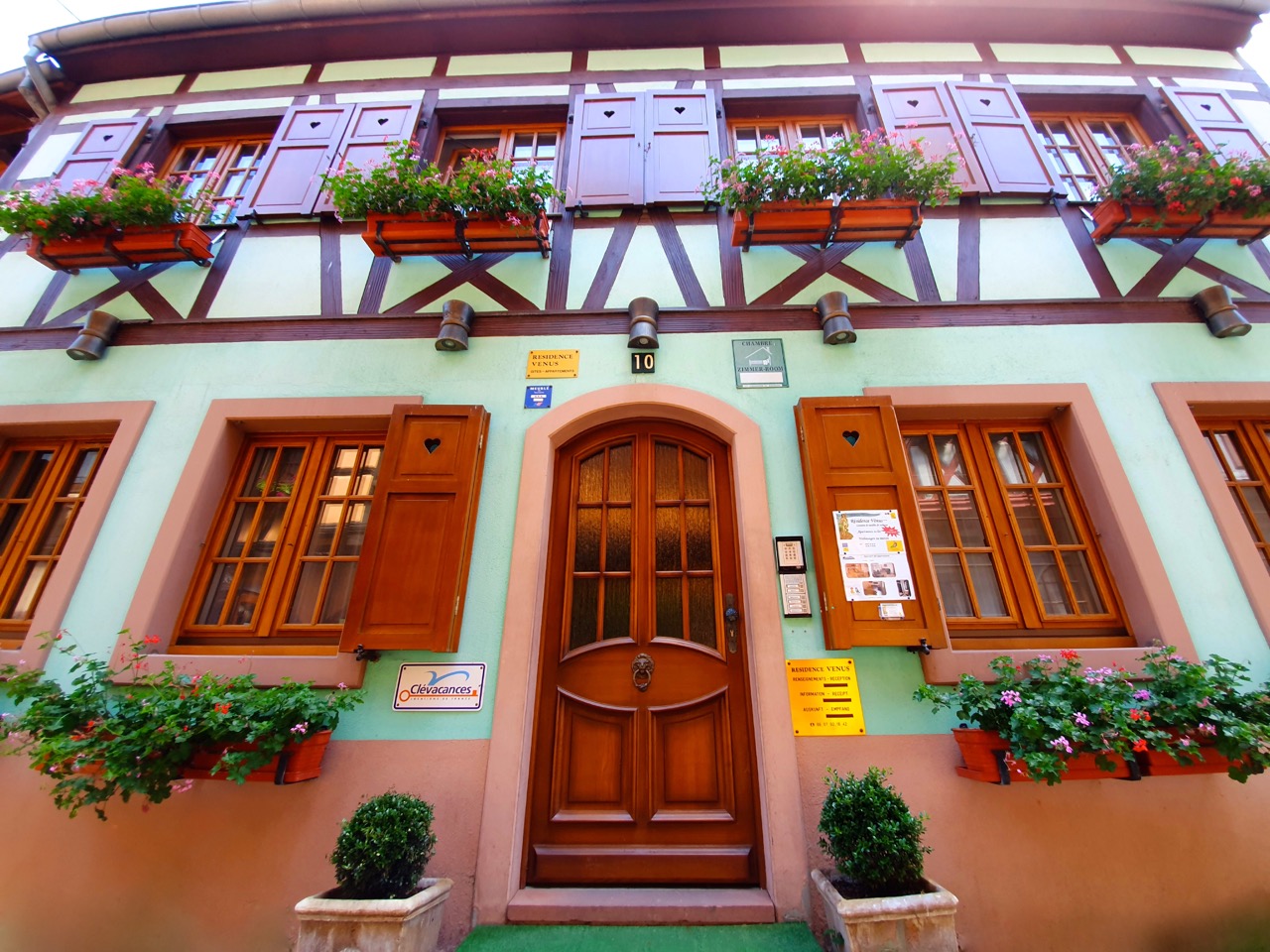 Chosen in Roman times for its suitability for wine production, the medieval village of Eguisheim nestles below the Trois Chateaux. Uniquely constructed in concentric circles, the village envelops a fortified octagonal Castle where, in 1002, the Pope St Léon IX was born.
Eguisheim has a unique combination of architectural styles, both civil and military : the ancient moats, half-timbered houses with quaint angular walls and overhanging balconies, fountains, the Cathedral with a Roman typanium, a C13th bell tower, tithe courtyards, C13th sculptures of the Virgin and the Castle of St Léon to name a few.

Some 5 km south-west of Colmar, surrounded by a wide strip of vineyards, at the foot of the “Schlossberg”, can be found Eguisheim, one of the oldest settlements in Alsace. In 1865 excavations revealed the first human traces, those of the “Cro-Magnon ” people originating in the Dordogne. “Homo Egisheimiensis”, now exhibited in the Colmar Museum, was followed by other peoples, each bringing the benefits of its own civilization, as can be seen from the numerous burials discovered within the boundaries of Eguisheim. After the Romans, who installed a camp near the entrance of the present-day village, the Franks, having defeated the Alamans, took over the area. At the centre of the charming town is the fortress built on the site of the first fortified manor, probably of timber, constructed about 720 by Earl Eberhard, grandson of Adalric, Duke of Alsace, and nephew of Saint Odile. The descendants of Adalric were closely related to the reigning families of both France and Germany. In 1002, at the “Castrum Egenesheim”, according to the Papal Bull of the Golden Rose (1049), was born Bruno, later known as Pope Saint Leo IX (1049-1054), the traveller Pope, reformer of the Church, and originator of the Truce of God. His father, Hugues IV, was Earl of Nordgau (Lower Alsace) and his mother, Heilwige, heiress of Louis of Dabo (Dagsbourg), was descended from the Earis of Roucy-Reims, flower of French nobility. Eguisheim castle became the residence of Hugues IV, and his descendants were entitled Earis of Eguisheim and Dabo Best known were Hugues VI (1089), ally of the Pope during the Quarrel of the Investitures and Albert II, called Hawk of Dabo (1211), ally of Othon IV against the Hohenstaufen in 1198.

On the death of Countess Gertrude in 1225, the inheritance was claimed by the Earis of Ferrette, closely related, but was acquired by the Bishop of Strasbourg, also a relative. In 1251, Eguisheim was incorporated into the “Obermundat” of Rouffach, and the episcopal bailiff resided at the castle in the centre of Eguisheim until 1752. Scattered settlements were abandoned. Tithe farms, belonging to the nobility, the episcopate and to numerous abbeys, were installed around the central keep, within the inner fortifications. An outer curtain wall protected humbler dwellings. The gateways of the fortified city were mentioned in a document dated 1257. In 1298, the town resisted a seige by Emperor Adolph of Nassau, but was pillaged by “the English” in about 1370 – 1380, and ravaged in 1444 by “the Armagnacs”, led by the Dauphin of France, the future Louis XI. Eguisheim and its population suffered every form of plague, not least the Black Death.
In 1557 and 1563, the Bishop constructed two fountains. After the Revolution the castle was sold as a national asset; the keep was demolished. From 1790 to 1802, Eguisheim was the capital of the administrative region. In XIXth century, the four gateways were demolished; the nave of the romaresque church was replaced in 1807 – 1810; happily the ancient bell tower was preserved, together with its XIIIth century tympanum. The construction of two new fountains (1835 and 1841) embellished the town, as did other examples of technological and professional progress. Victim of German annexation in 1871, Eguisheim suffered little material damage during both world wars and the visitor can today admire its original layout.

In the heart of the Alsatian vineyards, in a warm setting,
the Residence Venus offers furnished apartments with every comfort …
Rental all year round from 2 nights. 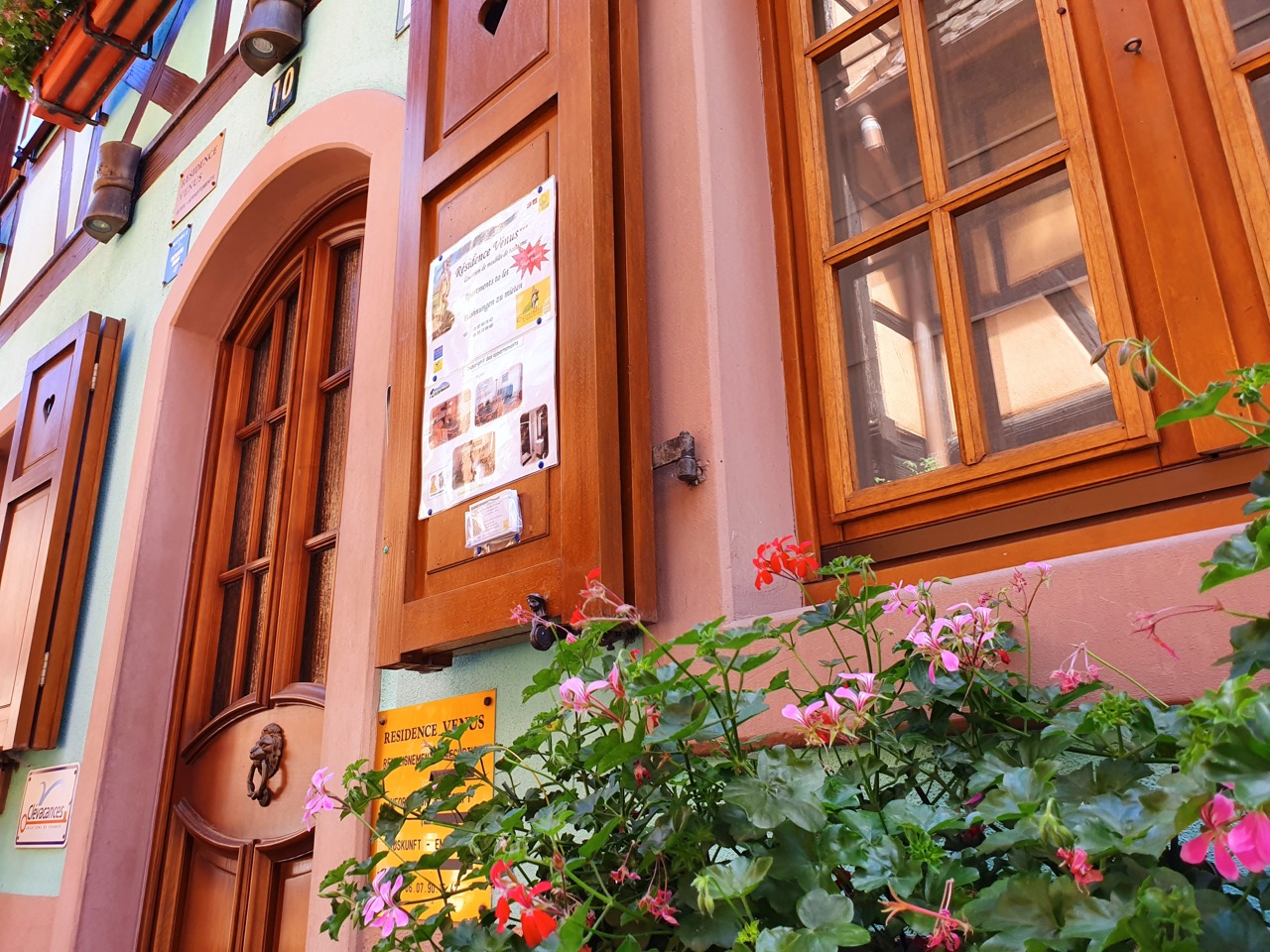 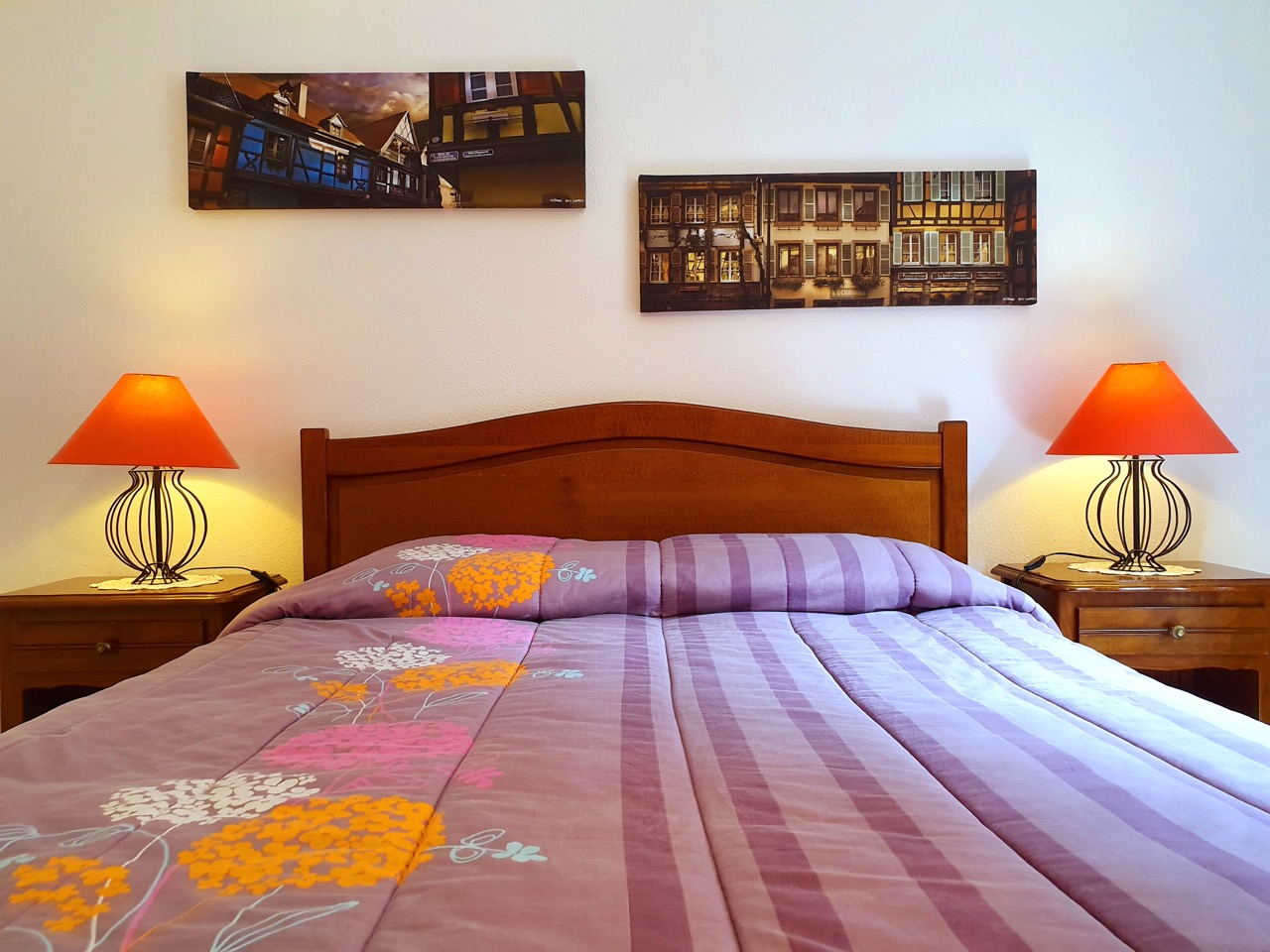 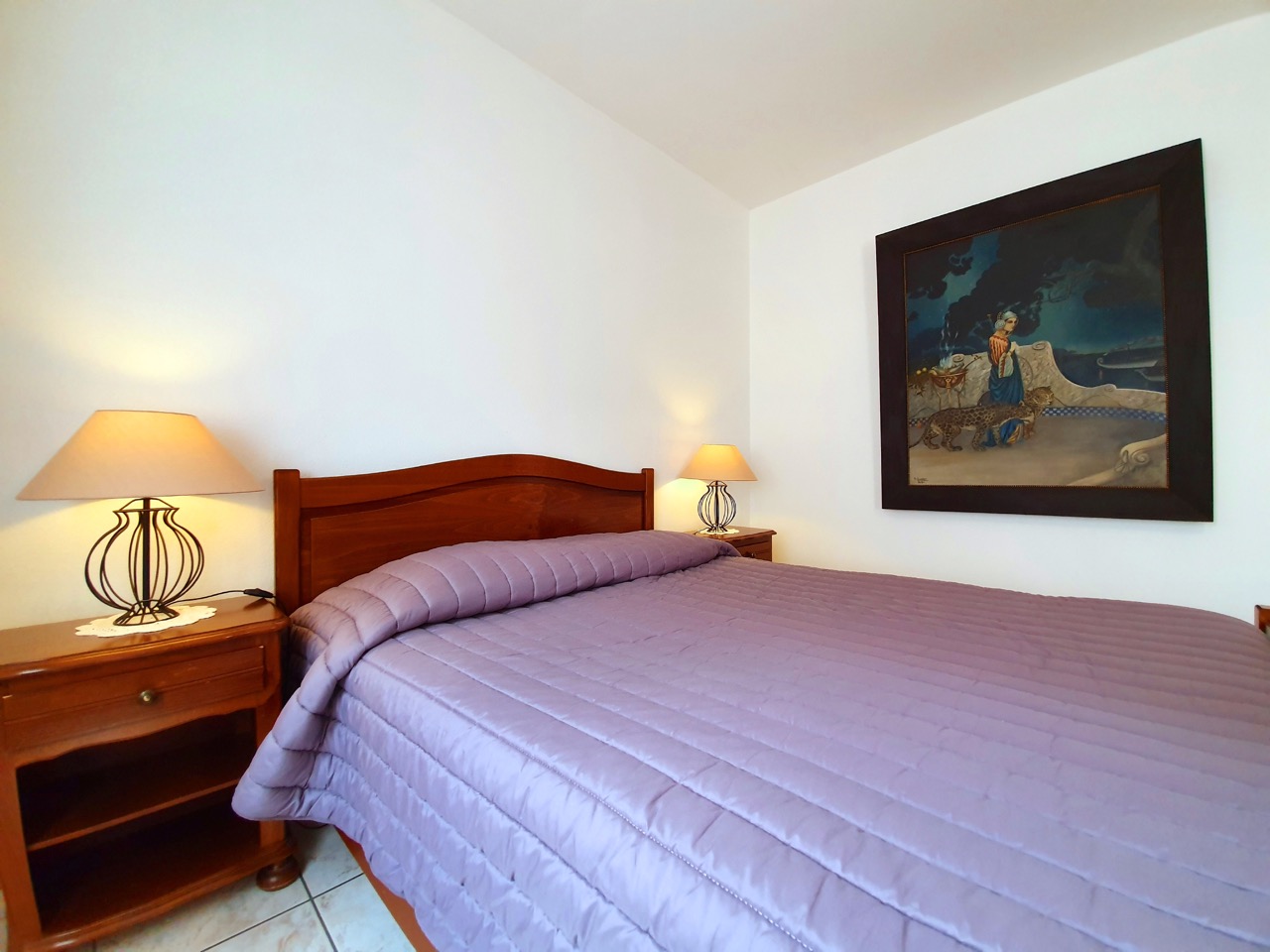 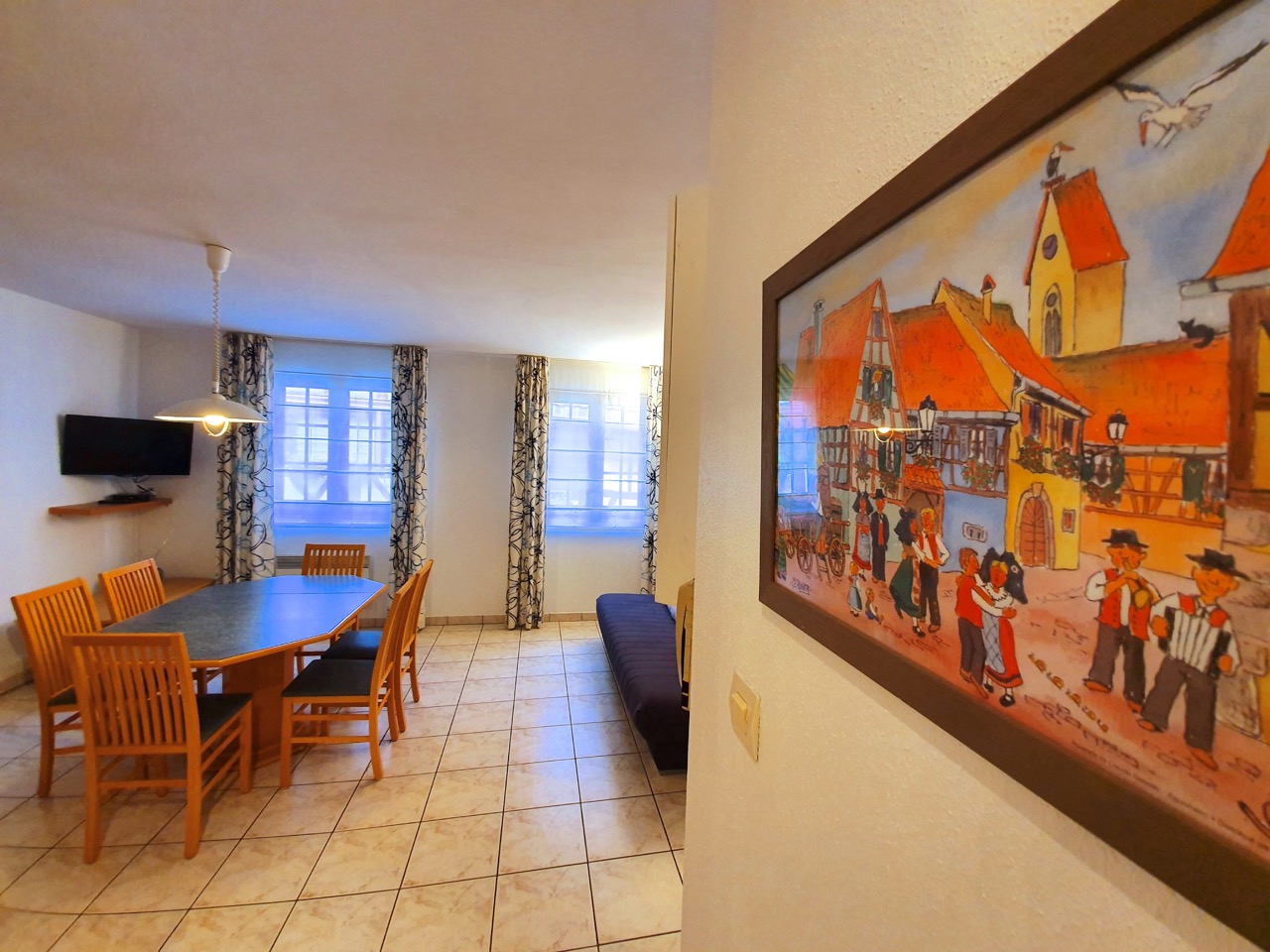 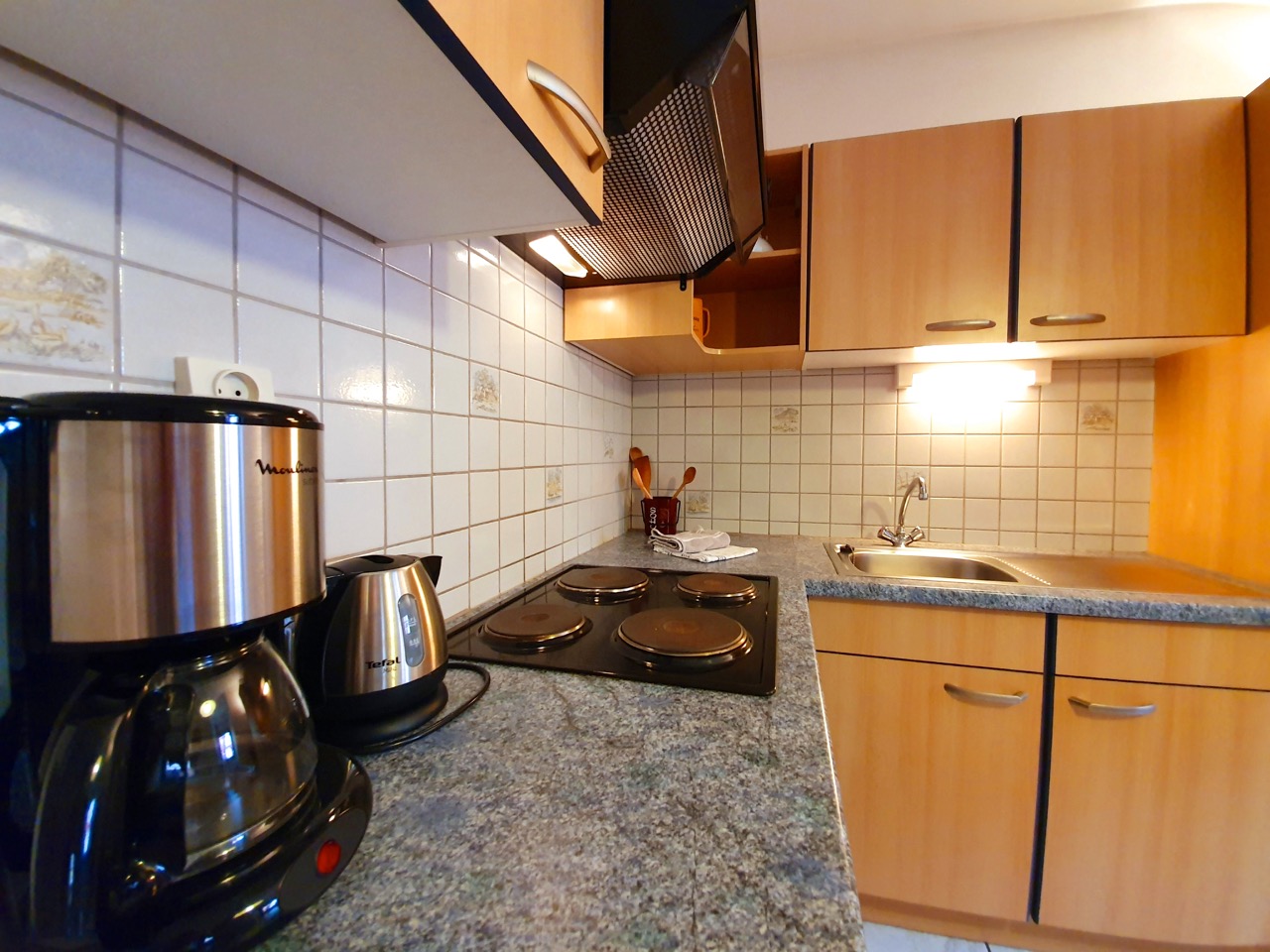 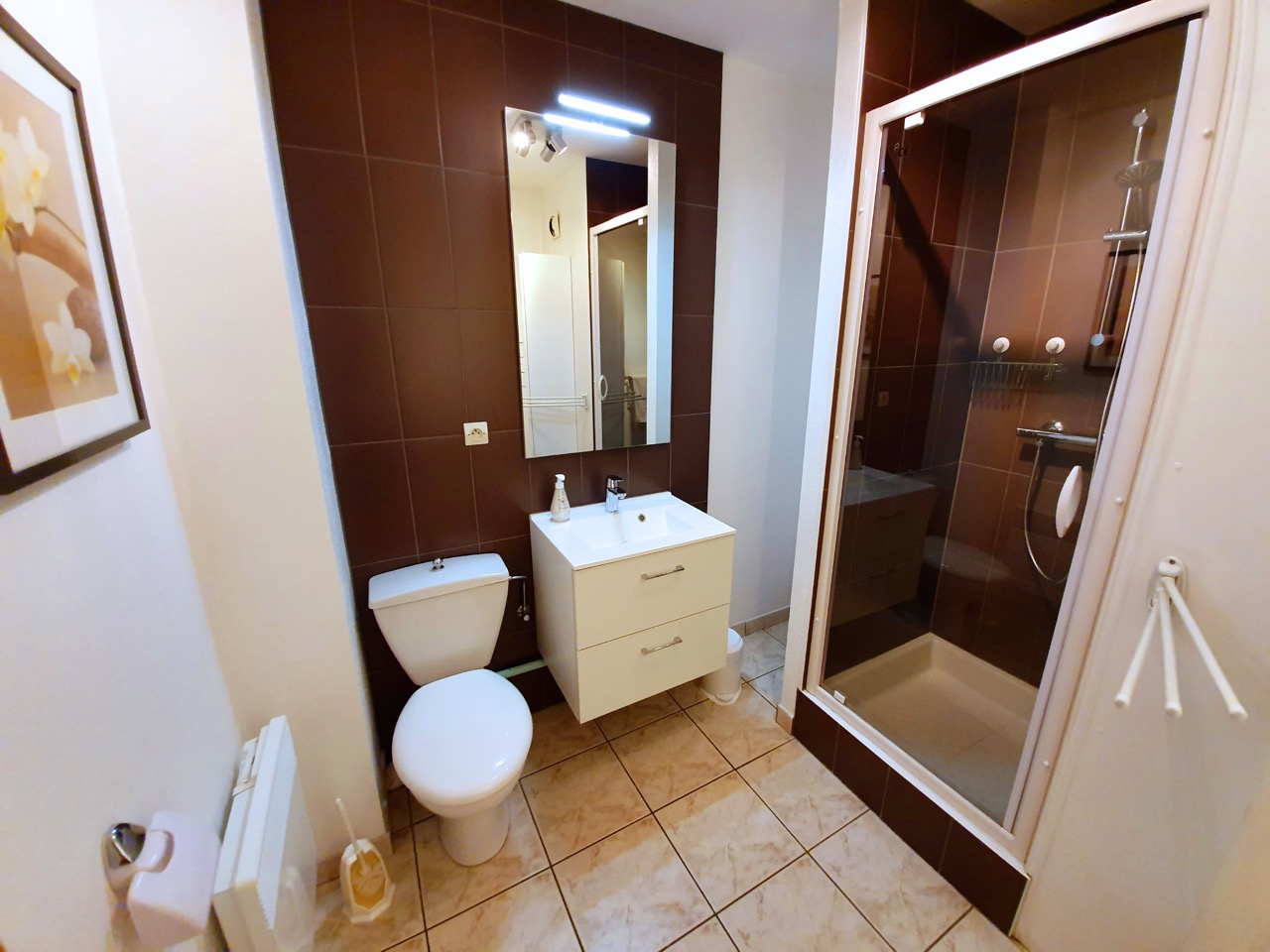 See the ApartmentsBook an Apartment
Menu